One of the few remaining IPv4-only services here at Redpill Linpro is our provisioning infrastructure, which is based on PXE network booting. I’ve long wanted to do something about that. Now that more and more servers are shipping with UEFI support, I am finally in a position to start looking at it.

I’m starting out by figuring out which DHCPv6 relay implementation we’ll be using. This post details my evaluation process, conclusion, and choice.

Most of the servers we want to provision are usually located in a dedicated customer VLAN that is connected to a set of redundant routers running Linux. The routers speak VRRP on each of the VLANs in order to decide which router is the primary one serving the VLAN in question.

Furthermore, each of the routers have multiple redundant uplinks to the core network, and are using a dynamic IGP to ensure optimal routing and fault tolerance. The DHCPv6 server is reached through the core network using unicast routing.

The following figure illustrates the topology: 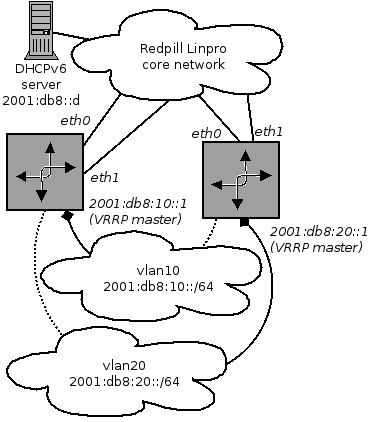 Our current IPv4-only network boot infrastructure relies heavily on using Ethernet MAC addresses to distinguish between clients. Being able to continue to do so will make the introduction of IPv6 support quick and easy. We would therefore like for the implementation to support the DHCPv6 Client Link-Layer Address Option.

As discussed in the previous section, the network configuration on the routers is dynamic and could change without notice. An ideal DHCPv6 relay implementation would be able to notice such changes and automatically adapt to the new environment. In our environment, this would mean being able to cope with:

Finally, regarding the software itself, we’d like for it to be:

Available implementations and their capabilities

From what I was able to determine, there are four available open-source DHCPv6 relay implementations. These are, in alphabetical order:

The versions I tested are shown in parenthesis.

Of the tested implementations, only Dibbler supported this feature. It is enabled by adding the line option link-layer in the configuration file.

Disappointingly enough, none of the tested implementations were able to do this. dhcpv6 will by default listen on all available interfaces, but it does not detect new interfaces showing up after it has started.

The other three implementations all require that the listening interfaces be configured explicitly.

Only WIDE-DHCPv6 was able to do this. It appears to check what the local address on the interface is every time it relays a packet, so it always sets the link address field in the relayed DHCPv6 packet correctly.

The other three implementations read in the global address (or lack thereof) for each interface when they start, and do not notice any changes. Thus, there is a risk that the link address field in their relayed packets is set incorrectly.

Only dhcpv6 supports this without any weirdness. The address of the DHCPv6 server is specified with the -su command line option, and packets are relayed to it using a standard routing lookup.

ISC DHCP and WIDE-DHCPv6 behave in a rather bizarre way. They both require that the interface facing the DHCPv6 server is explicitly specified on the command line, but for some reason they completely ignore it and instead use a standard routing lookup to reach the server.

Dibbler also requires that the upstream interfaces are explicitly configured. If there is no route to the DHCPv6 server on one of these interfaces, it will log the following error for each DHCPv6 request:

That said, it is possible to simply configure both eth0 and eth1 as upstream interfaces. This will ensure all requests are correctly relayed regardless of which interface has the active route to the DHCPv6 server. That said, I’m only awarding half a point to Dibbler here, both due to the clunkyness of the workaround and the constant stream of error messages it will result in.

Only Dibbler and ISC DHCP appear to be. According to its own homepage, dhcpv6 was discontinued in 2009. WIDE-DHCPv6 has not seen any release since 2008.

Only dhcpv6 is missing, the rest are an apt-get install away.

Out of a maximum 7 points, the final scores are as follows:

Disappointingly enough, none of them are able to run continously in a dynamic environment like ours. To work around this, we’ll probably have to devise a system that automatically generates new configuration and restarts the relay whenever a network configuration change is detected. Should a DHCPv6 request arrive exactly when the relay is being restarted, it will likely be retried within seconds, so this is extremely unlikely to cause any operational issues.

This workaround will handle the lack of desired capabilities 2 through 4. After disregarding these, only Dibbler gets full score (due to its support for the Client Link-Layer Address Option). Dibbler is thus the obvious choice.