2016 is soon approaching. In this post I’ll take a look in the rear-view mirror to see how well we did in Norway with regards to IPv6 deployment in 2015. I focus on the status on the end-user side of things, that is, the extent of IPv6 deployment amongst Norwegian ISPs. This is due to the fact that my employer Redpill Linpro mainly provide managed services to content providers, so the traffic entering our dual-stacked data centres can only tell a story about how the ISPs are doing.

Our customer VG is kind enough to let me use their web site traffic to publish graphs detailing IPv6 deployment in Norway. VG is the largest Norwegian web site, appealing to a broad audience. Therefore the collected data gives a very good basis for making accurate statistics about the Norwegian population in general. The graph below visualises this data, showing how the Norwegian IPv6 adoption rate has developed throughout 2015: 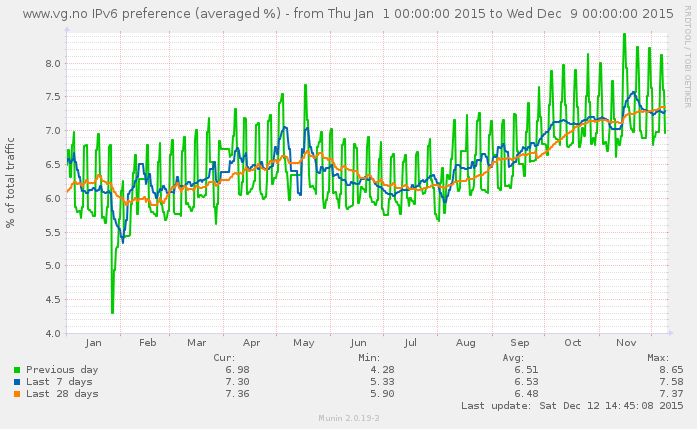 This shows that at the time of writing, 7.3% of all the traffic that reached VG in the previous week was IPv6. While this is an increase compared to the beginning of the year, it is a disappointingly small one - only about a single percentage point.

The graph usually peaks above 8.5% every weekend and drops below 7% during weekdays. This tells us that that Norwegians are much more likely to have IPv6 at home than at work.

It is worth noting that other large content providers are also measuring IPv6 usage in Norway, and their measurements appear to confirm that my numbers are in the right ballpark: Akamai currently reports 7% adoption, while Google reports 7.94%.

On a global scale, Norway is actually quite average. The last few months in Google’s global IPv6 adoption graph are eerily similar to the VG data for the same period. Ranking the countries by their Google-reported IPv6 adoption percentage shows we’re #15 in the world:

I’d say this is nothing to celebrate, except perhaps that we fare better than all of our Nordic neighbours (but probably not for long, as Finland is #16 and is climbing fast).

How did the Norwegian ISPs fare in 2015? 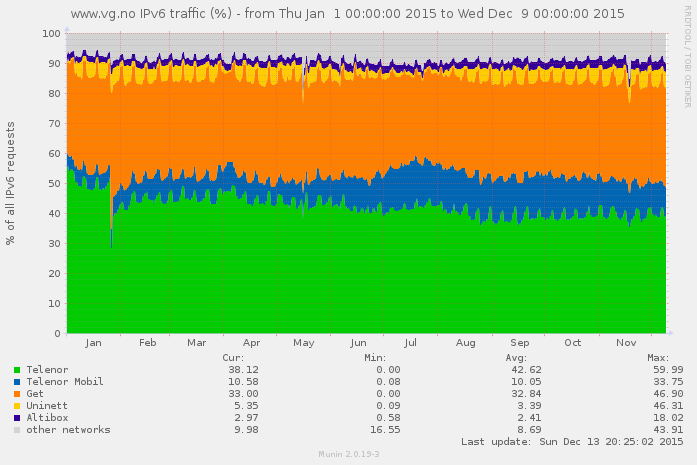 Norway is essentially an IPv6 duopoly. Over 80% of all IPv6 traffic originates from two ISPs: the incumbent telco Telenor and the cable ISP Get.

On the two next spots we find the NREN UNINETT and the fibre ISP Altibox. These two are responsible for a tiny (but measurable) share of IPv6 traffic each.

The four networks I’ve mentioned account for over 90% of all the IPv6 traffic. The remaining 10% is the long tail, consisting of way too many networks to mention individually here, as they are responsible for only a miniscule amount of IPv6 traffic each.

Below I examine more closely how Telenor and Get fared in 2015. Note that the Y axis of the following graphs shows a percentage of all traffic, i.e., including IPv4 traffic and IPv6 traffic from other ISPs. It does not say anything about how many of Telenor’s or Get’s subscribers are dual-stacked. Unfortunately, I don’t have such statistics at the moment. Akamai does, however.

Zooming in on Telenor

Telenor uses two distinct IPv6 prefixes, allowing me to make two graphs: One for their mobile subscribers, and another for all their wired broadband subscribers (i.e., cable, DSL, and fibre). 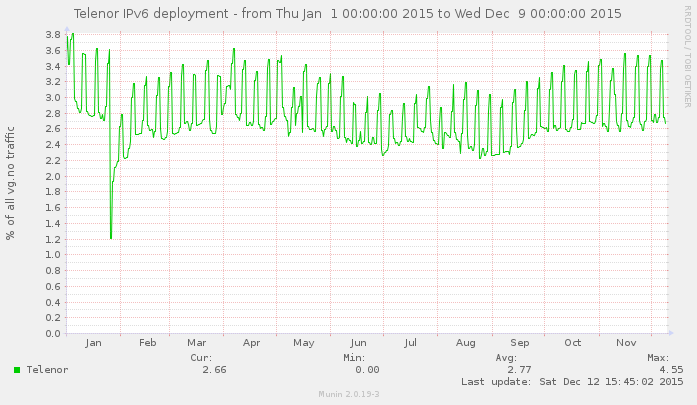 The above graph is for Telenor’s wired broadband customers, which is the largest group overall. It is disappointing to see that this group has not grown at all in 2015; rather, it looks like the percentage at the end of the year will be slightly lower than it was at the start of the year! Telenor is a long way from having rolled out IPv6 to their entire customer base, so I am truly hoping that they will pick up the pace again in 2016. (In case you’re wondering, the marked drop in the end of January was caused by a critical problem in their network.) 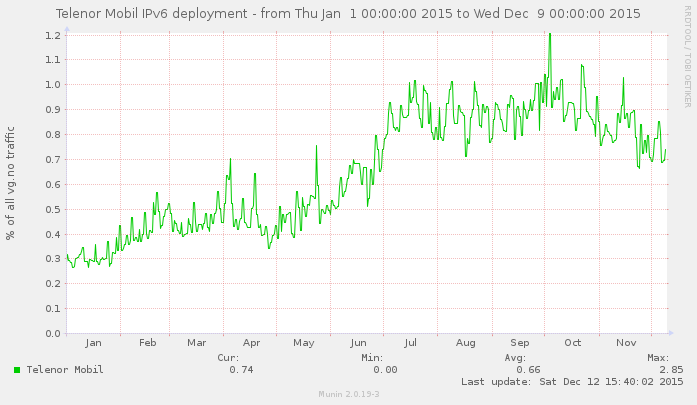 Telenor’s mobile subscribers are doing much better. Their IPv6 traffic has more than doubled in 2015. It is however quite worrying to see that the trend the last couple of months is clearly a negative one.

Telenor is by far Norway’s largest ISP. In absolute numbers, they are without question the largest source of IPv6 traffic too. However, according to Akamai, only 5.5% of Telenor’s subscribers are IPv6-capable, so there is clearly a huge potential for increased IPv6 deployment in Telenor in the future.

Zooming in on Get 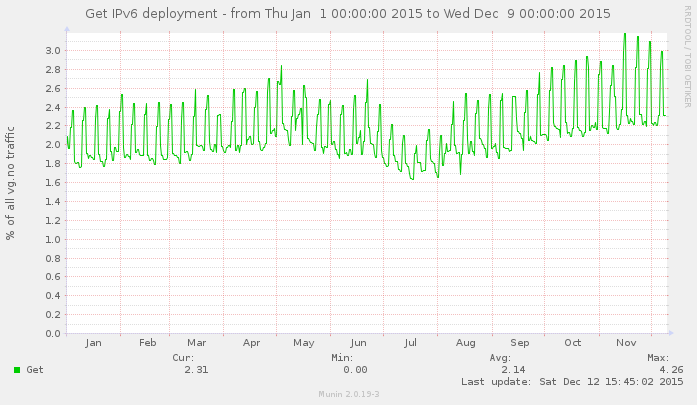 Get is growing their IPv6 deployment. It’s not going very fast, but it is a steady positive trend. (The decline in the summer months is better explained by Get’s customers leaving home to go on holidays than anything Get did.)

According to Akamai, 24.1% of Get’s customers are IPv6-capable. This means Get is the ISP with the largest share of IPv6-capable customers in Norway - well done! At the same time, three out of four of their customers remain IPv4-only, so there is plenty of potential for further improvements in 2016.

If I’m being honest, I must say that 2015 turned out to be a rather disappointing year for IPv6 adoption in Norway. In the second half of 2014 I observed a rapid growth, but this trend did unfortunately not continue in 2015.

I’m hoping that Get and Telenor will intensify their IPv6 deployments in 2016. Especially Telenor has a lot of potential for growth - for example, their cable customers must currently manually opt-in to get IPv6, and all the Apple devices on their mobile network remain IPv4-only. If neither of those two things change in 2016 I’ll be very disappointed.

When it comes to the other major national Norwegian ISPs, I truly hope that 2016 will be the year when I’ll start seeing significant amounts of IPv6 traffic from them. I’m thinking in particular about the likes of Altibox, NetCom, and NextGenTel here.

I’d like to end on a more positive note, though. I’ll do that by commending Difi, a.k.a. The Agency for Public Management and eGovernment, for having made significant progress towards making IPv6 support a mandatory requirement in the Norwegian public sector. In 2016 this will likely become Norwegian “law”. The Norwegian public sector is huge and wealthy, so the moment the service providers start realising that lacking IPv6 support will disqualify them from bidding on lucrative government contracts, I think we’ll see quite a few laggards scrambling to catch up.