I recently needed to remove a couple of decommissioned switches from one of our data centres. This turned out to be quite an ordeal. The reason? The ill-conceived way the rack mount brackets used by most data centre switches are designed. In this post, I will use plenty of pictures to explain why that is, and propose a simple solution on how the switch manufacturers can improve this in future. 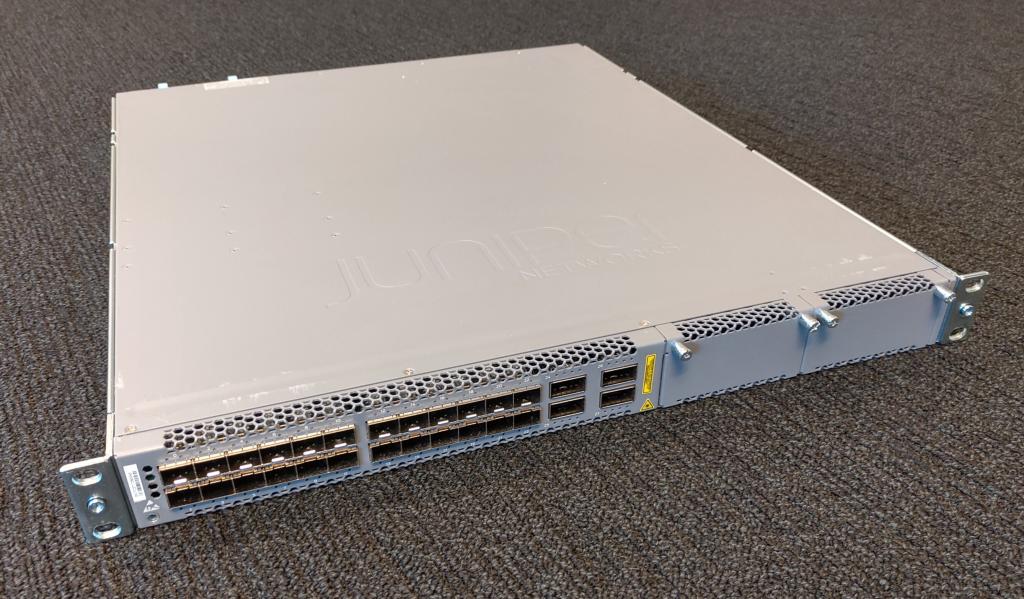 The picture above displays a Juniper EX 4600, a pretty standard data centre switch for mounting in 19” server racks.

Pay attention to the little «ears» protruding from the sides at the front of the switch chassis. Those are the rack mount brackets. 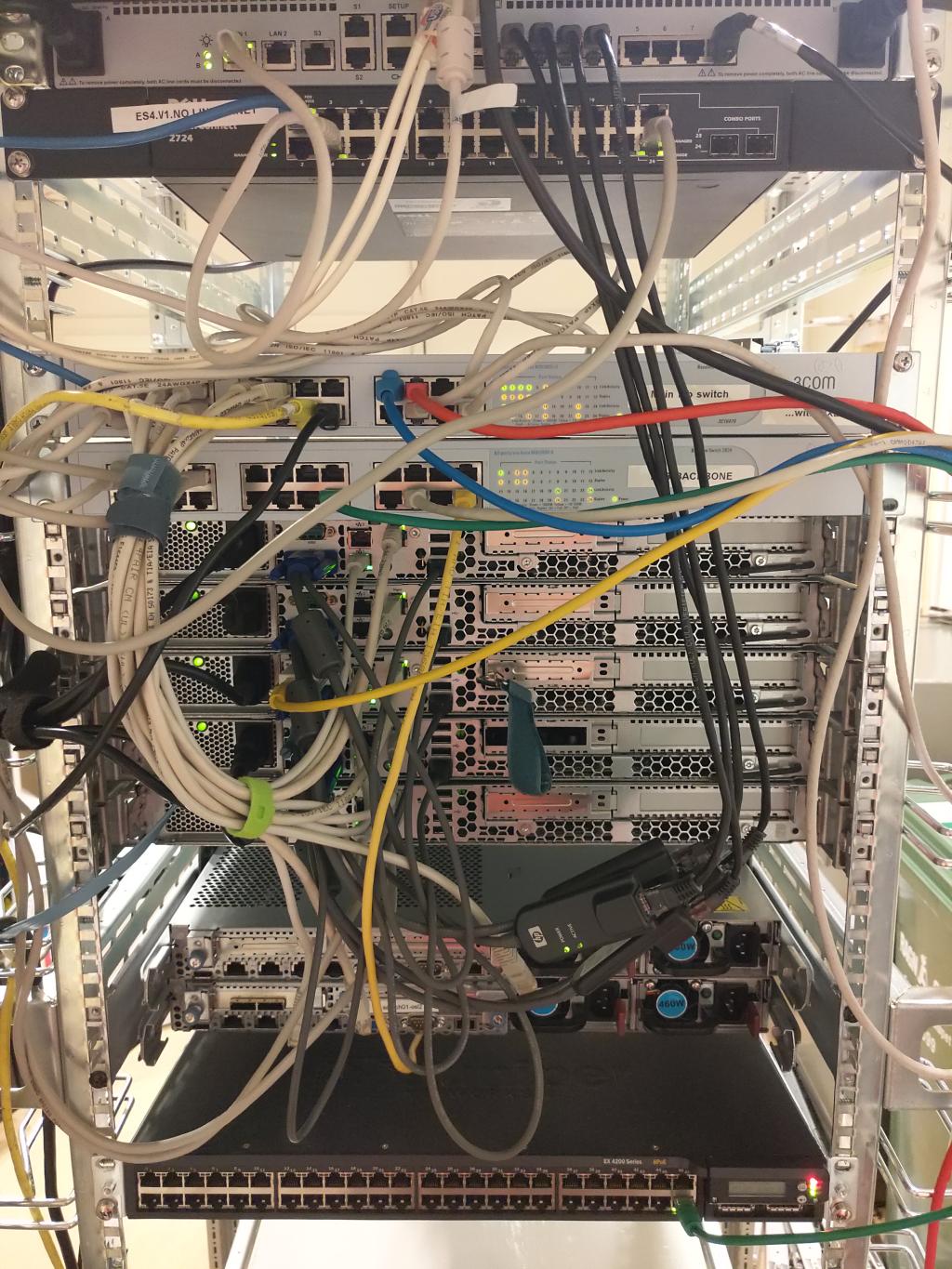 This picture shows the rack in our lab. There are seven servers and five switches in the picture. The switches have all the exact same kind of rack mount brackets as the switch in the first picture.

Now you know how data centre switches are mounted. If you have sharp eyes, you might already have realised what the problem is. If not, read on! 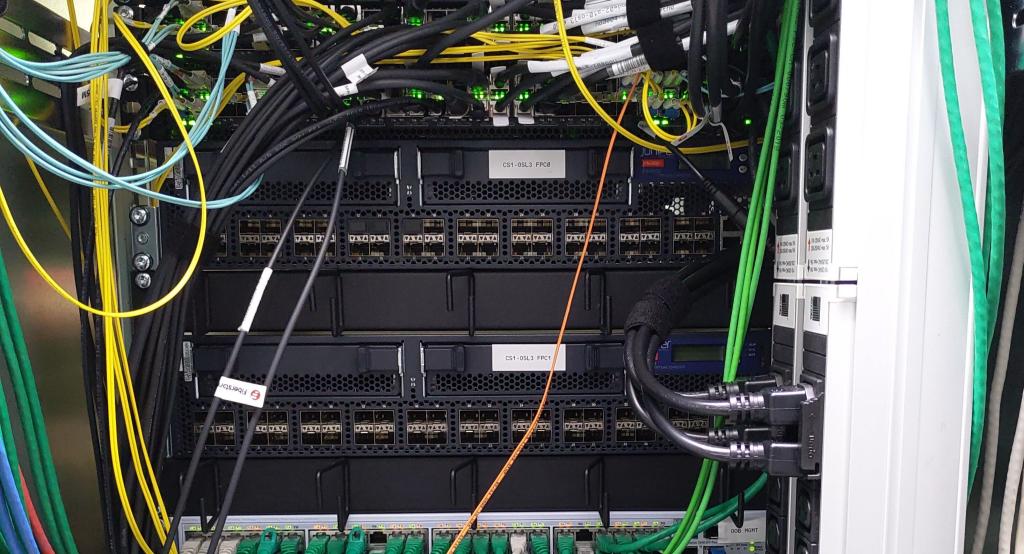 This picture shows the rear of a rack cabinet in one of our data centres. I needed to remove the pair of Juniper EX 4500s in the centre. The EX 4500 is an old and end of life model, so they had to go in order to make room for a set of new Edge-Core AS7326-56X we have arriving soon. 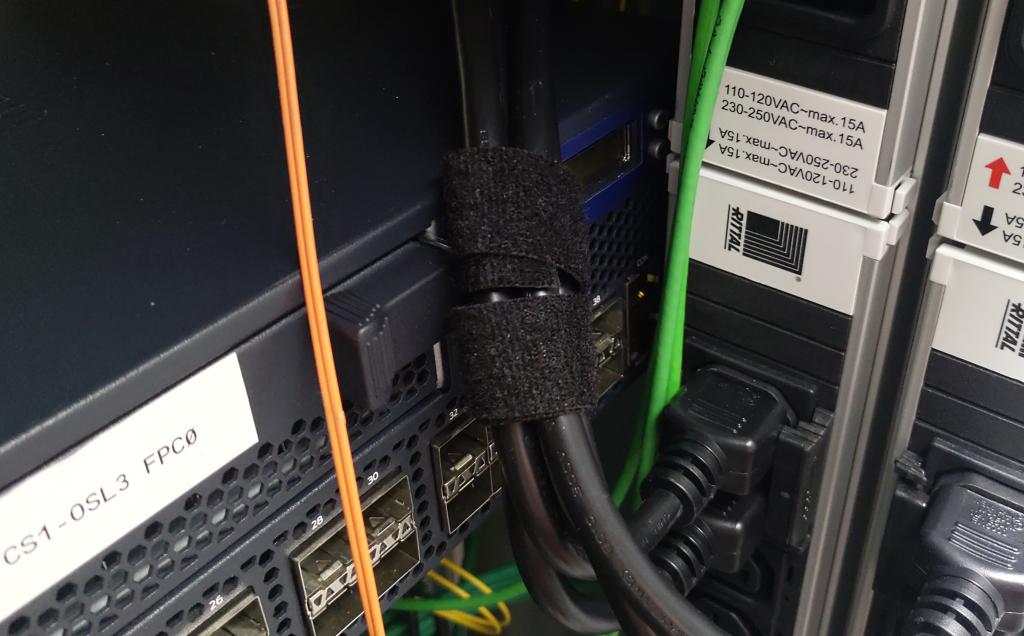 In case it was not obvious from the previous picture, this ought to illustrate why I was having difficulties removing these switches from the rack. When I tried to pull them out, they were blocked by the vertical power distribution units occupying the space behind them.

Even if the PDUs were not in the way, network cables could also have posed a bit of a problem. I think that I would have been able to overcome that in this particular case, though.

Removing the power distribution units is not an option, as that would mean powering down all the other production equipment located in the rack.

This is the view from the front of the rack. (I had removed all the FRUs from the switches in order to make them lighter and easier to handle.)

On this side, there are no power distribution units and there are very few cables in the way. If I could have simply pulled out the switches through the front of the rack, I would have had no difficulties whatsoever. 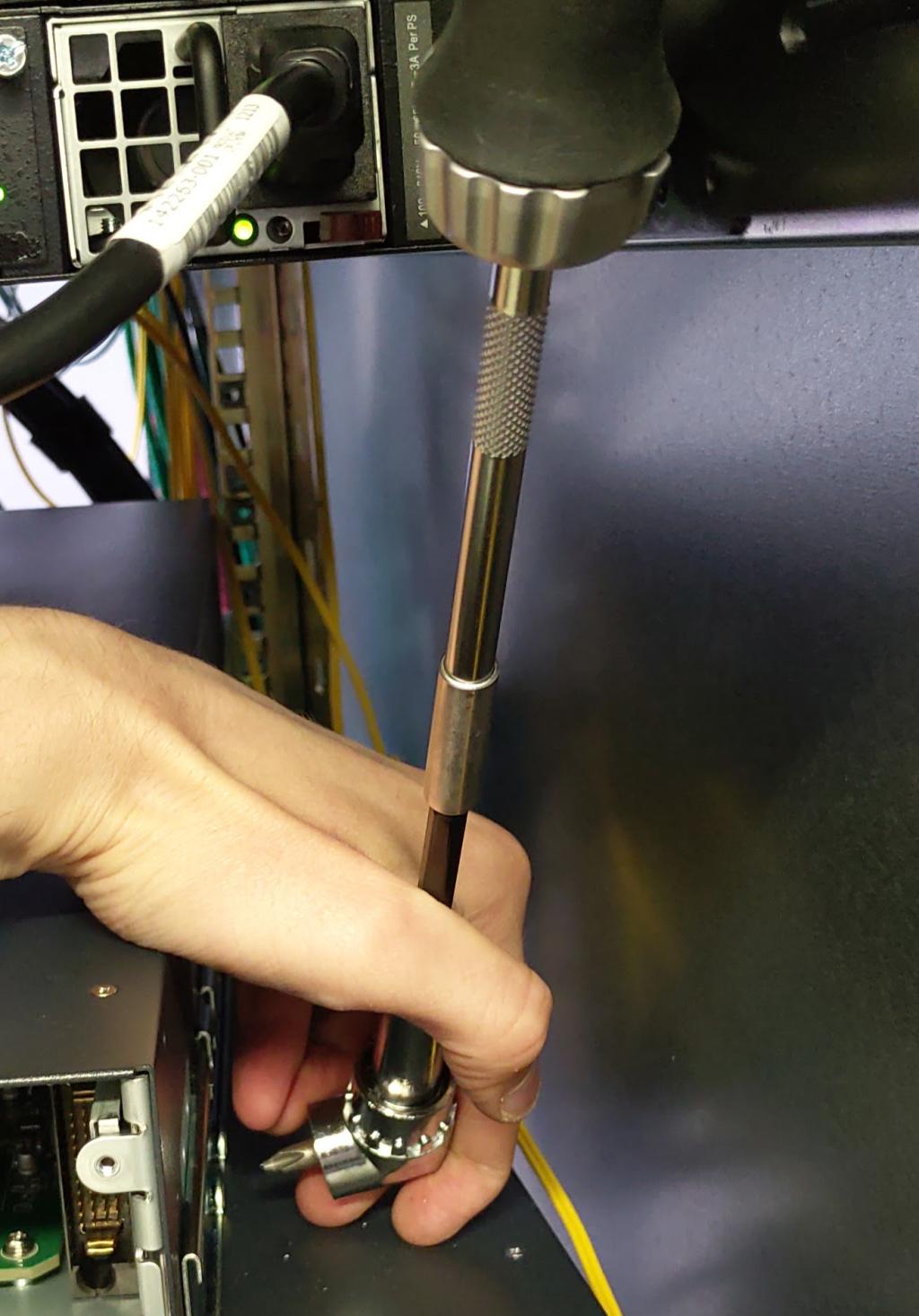 The rack mount brackets are not usually part of the switch chassis itself, they are screwed on. As there was a lot of room at the front of the rack, I was able to attempt removing them using an angled screwdriver.

Unfortunately, the only thing I accomplished was to destroy the Phillips screw head. The screws had most likely been treated with thread-locking fluid at the factory, and because I had to use an angled screwdriver I was unable to get enough pressure onto the screw to prevent the screwdriver from slipping - not to mention that I could not really see what I was doing from where I was standing. (I suspect I might have succeeded if the screws had been of a more slip-resistant type, e.g., Torx.)

At this point, I decided to call it a day.

Brute force to the rescue!

The next day I brought a few tools one would normally not expect to see in a data centre. 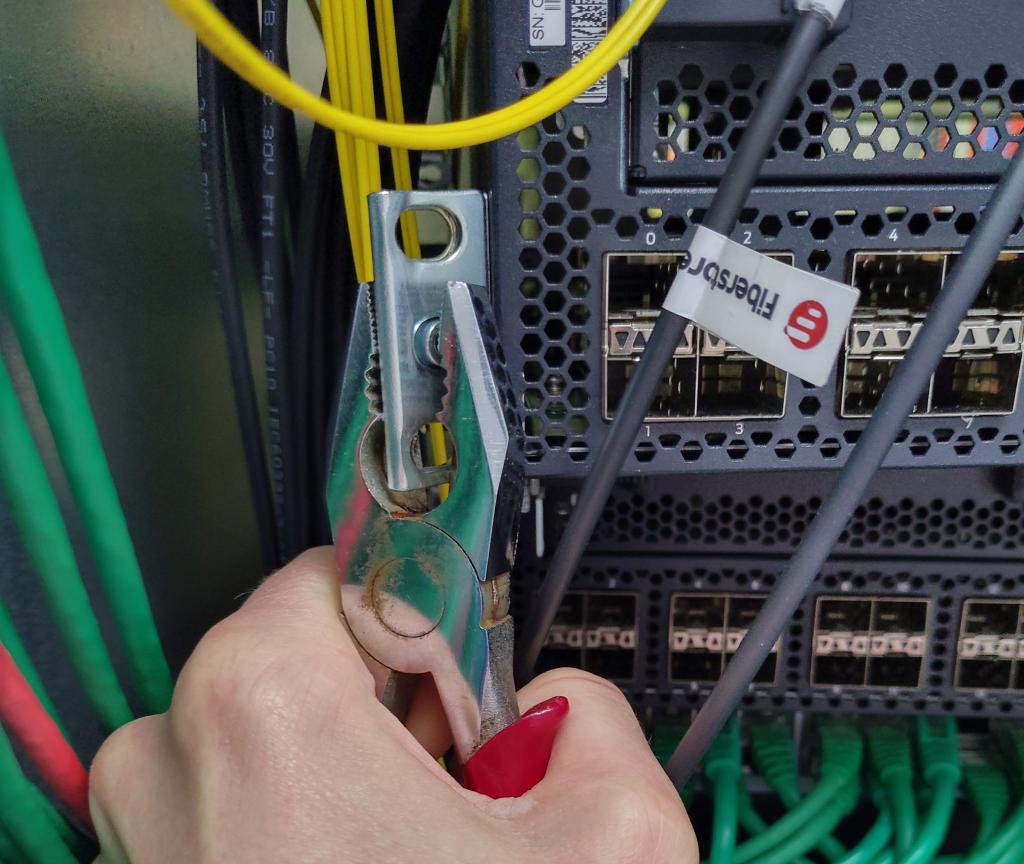 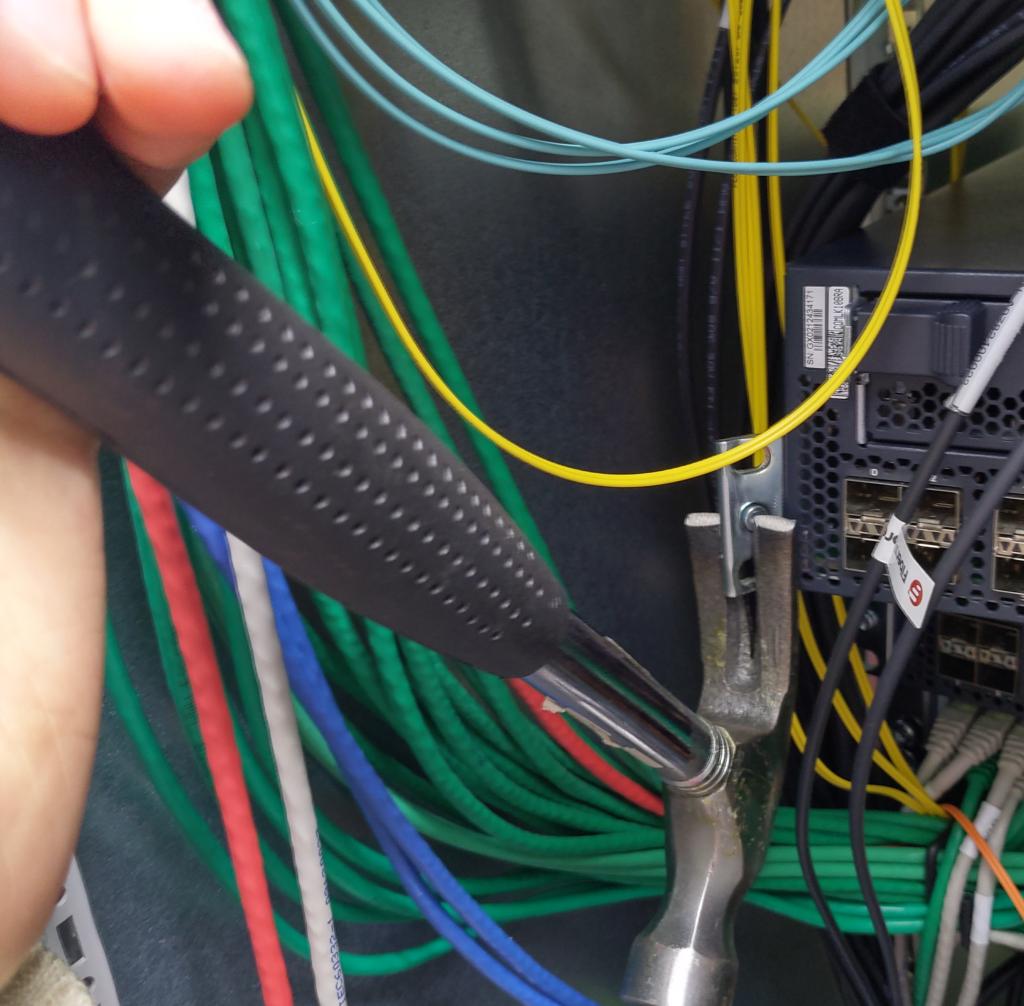 …and a hammer. Using these, I was able to bend the rack mount bracket out of the way. 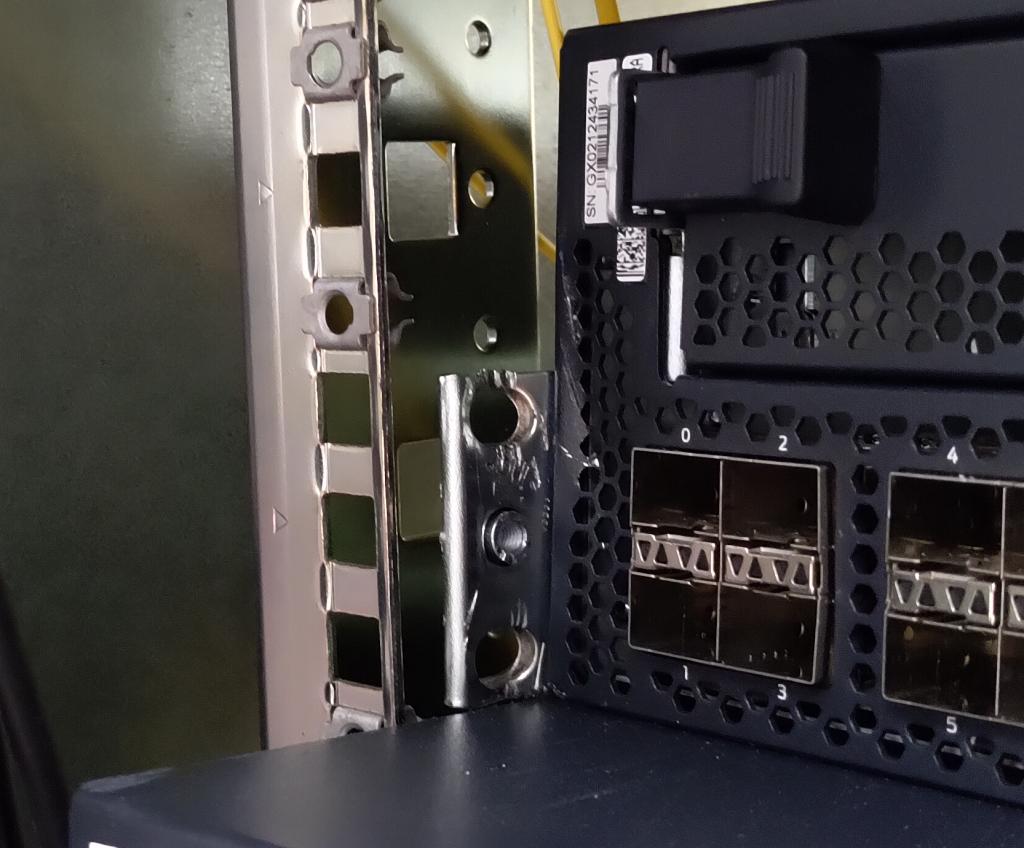 With the rack mount bracket on the left side flattened, I could sneak the switch past the 19” mounting profile. 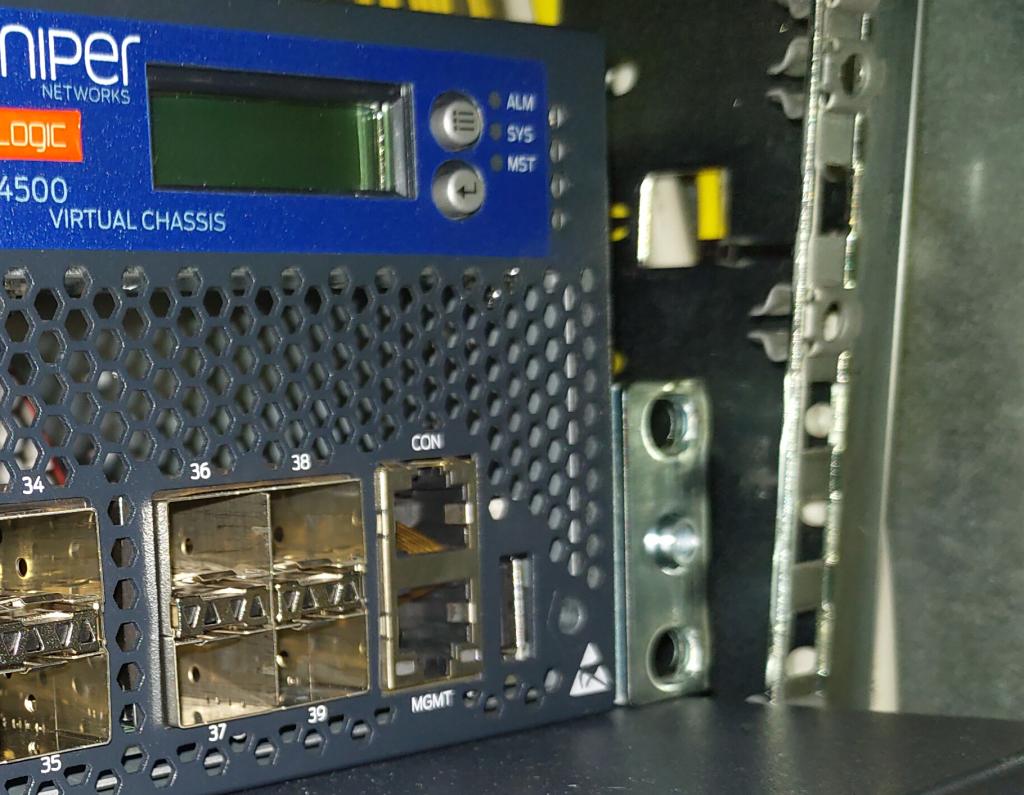 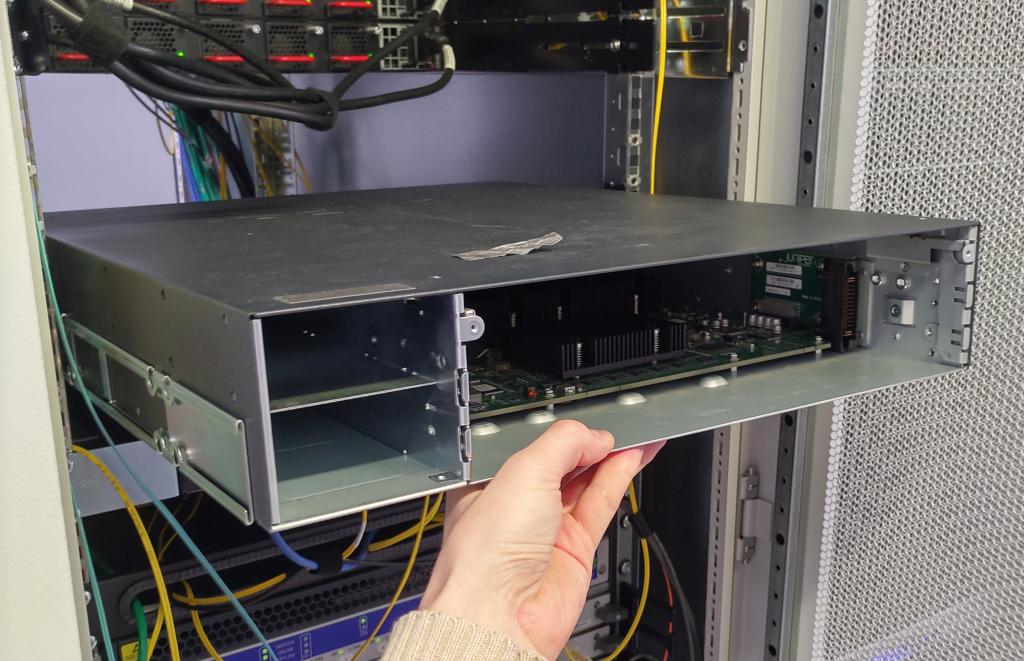 At this point, removing the switch through the front of the rack posed no challenge at all.

I then repeated the process for the other switch. Success! 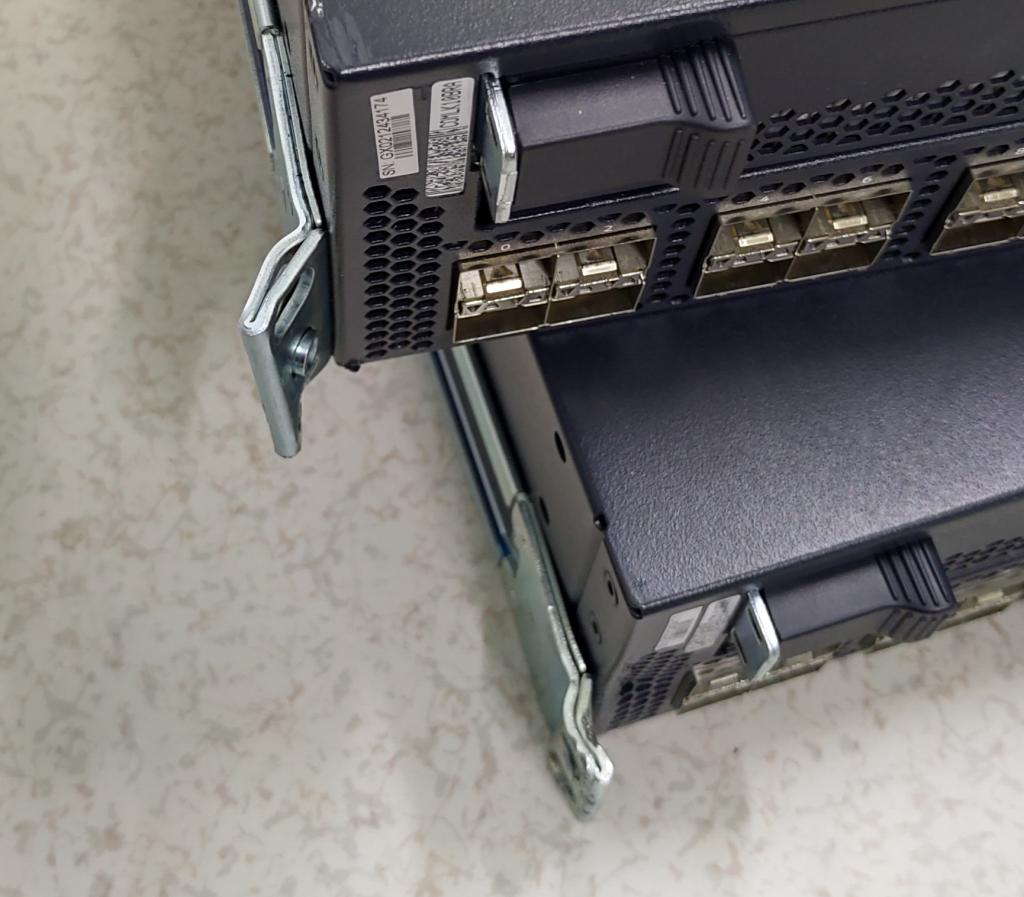 The process clearly took its toll on the rack mount brackets. They could probably be bent back to working order, though. I also dented the chassis of one of the switches a bit. 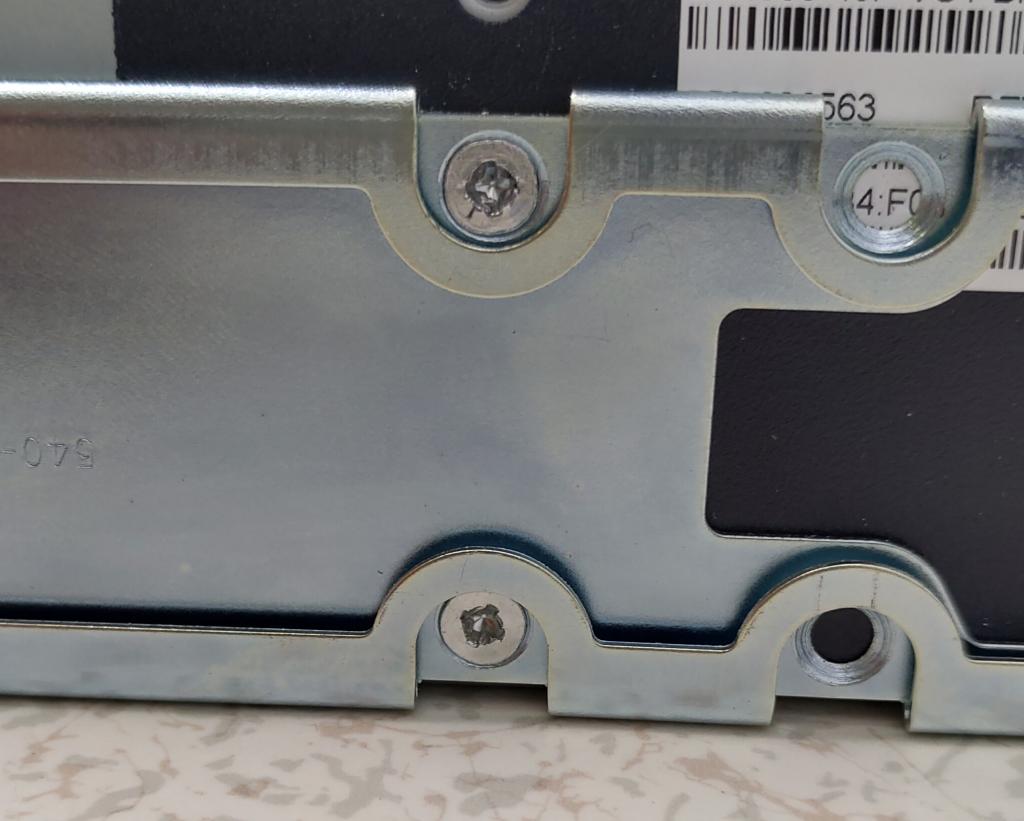 The screws I tried to unscrew using the angled screwdriver do not look too good either. However, I believe I could get them out using a screw extractor.

Fortunately, these were old switches that we are not putting back in service, so I do not really care about the damage.

A plea to the switch manufacturers

To me it seems blindingly obvious that the rack mount brackets that come with data centre switches should be designed so that they allow for extraction through the front of the rack - sliding away from all cables, PDUs and other obstructions in the crowded rear.

If you are a data centre switch manufacturer reading this, you do not have to look further than to the server manufacturers for inspiration.

For as long as I have worked in the industry, I have never ever seen a rack-mountable server that does not get installed through the front of the rack. This makes removing it a breeze. You just disconnect all the cables, and pull it straight out. Done!

Returning to our lab for a demonstration, it would have been impossible to remove the server in the middle through the rear of the rack, due to all the cables that occupy the space it would have had to pass through. But since it is sliding away from the cables, there is no problem at all.

Out through the front of the rack it slides. Easy!

While you are at it, dear switch manufacturer, you should also note that the servers in the pictures, like most servers on the market, have rack mount rails that do not require any tools to be mounted. Everything just clicks into place. There are no screws that can be dropped and lost below the raised data centre floor. This is definitively something I would like to see network equipment manufacturers start doing as well. (If you absolutely must include screws, at least use Torx instead of Phillips.)

From now on I will start discarding any standard rack mount brackets that do not allow for installation and removal of the equipment through the front of the rack. It is just not worth the trouble when the time comes to remove it again.

If you are in the process of acquiring new switches for your data centre, do make sure to ask your vendors if their switches come with sensible rack mount brackets. Perhaps if enough customers ask, they will actually improve.

In the mean time, though - if you know of any generic replacement rack mount system that is suitable for switches, I would love to hear from you!

(Note: this is a repost of an article from the Redpill Linpro techblog.)