Almost five years after I wrote about the PlayStation 4’s lacklustre IPv6 support, I have finally managed to get my hands on the PlayStation 5 – and I have of course taken a close look at its IPv6 capabilities.

Does the PlayStation 5 support IPv6 at all?

It does indeed! In the View Connection Status page of the network settings, it displays any assigned IPv6 address, gateway and DNS server; right next to their IPv4 counterparts. 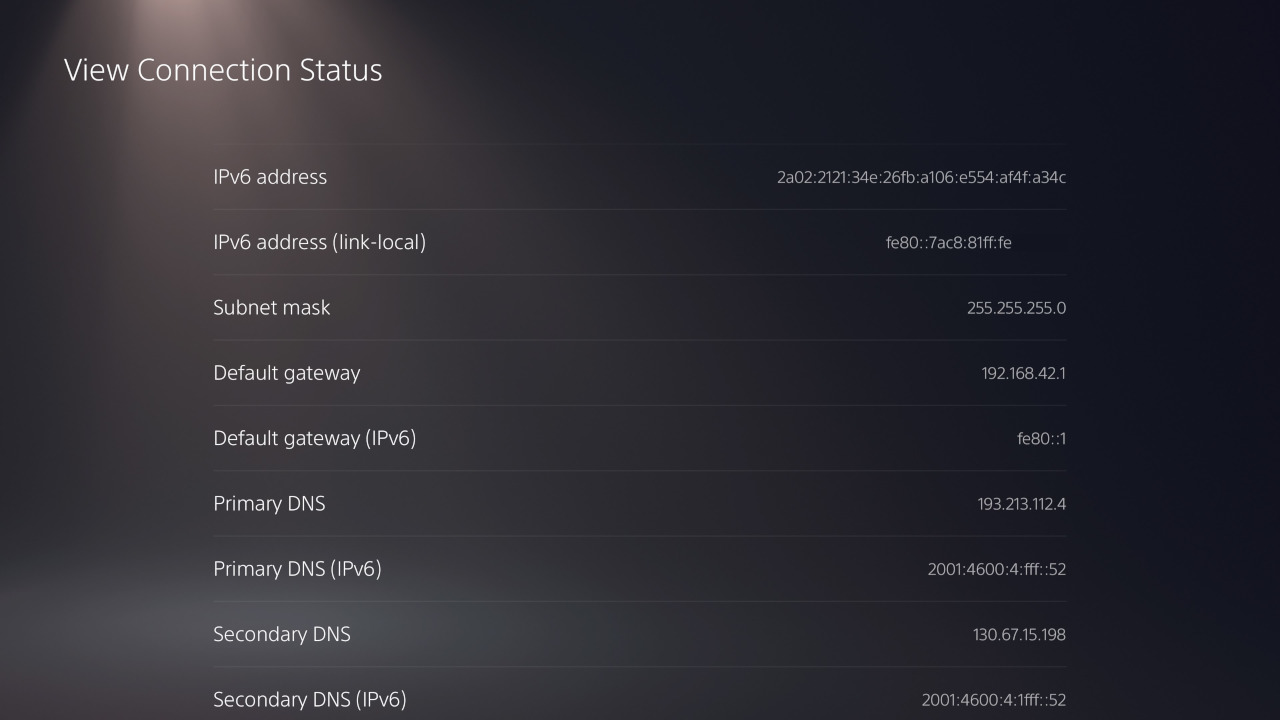 This is a clear improvement over the PS4, whose IPv6 support was not acknowledged by the user interface at all.

What does the the PS5 use IPv6 for?

Not much, really. I have seen it use IPv6 for the following:

Some other things that appear to be IPv4-only include:

If there is no DHCPv4 service on the LAN, the network settings UI will say Failed for both Wired LAN 1 and Internet connection. In spite of that, the View Connection Status page does show an IPv6 address, DNS server and gateway. Not much work in this state, I mostly encounter errors saying You’re offline, No Internet connection available, and so forth. The exception is the Netflix app, which continues to work just fine! (It is now using the system IPv6 DNS server instead of 8.8.8.8.)

If I keep DHCPv4 disabled but start advertising a DNS64-enabled DNS server, the PS5 still claims that Wired LAN 1 and Internet connection is Failed. However the View PlayStation Network Status page has begun working (this is just an embed of https://status.playstation.com). Twitch also starts working (using NAT64 for its Internet traffic). Fortnite, NRK TV, PlayStation Store and YouTube, on the other hand, still do not work.

Lastly, if I re-enable DHCPv4 while leaving DNS64/NAT64 in place, it does not seem to be using IPv6 via NAT64 for much. PlayStation Store downloads, Fortnite, NRK TV and YouTube continue to use IPv4 only.

The PS5 does support IPv6, and the Netflix app proves that IPv6 connectivity is available for use. Apart from Netflix, though, there is not much use of IPv6. That goes both for the system software and its bundled apps, as well as for third-party apps and games.

Some of that might be attributable to a lack of IPv6 support on the server side, as evidenced by IN AAAA queries for hostnames that have no IPv6 addresses. On the other hand, when I use DNS64 to make those IN AAAA queries be answered, it doesn’t really make much of a difference – IPv4 is still preferred most of the time.

Furthermore, most of the PS5 apps and games I tested do not make any IN AAAA queries in the first place, so DNS64/NAT64 would not help in any case.

Thus software upgrades would be necessary to make these apps and games fully IPv6 capable. The YouTube app is a good example of this; it is well known that the YouTube servers supports IPv6, but their PS5 app never issues any IN AAAA queries, so it ends up using IPv4 for its video traffic.